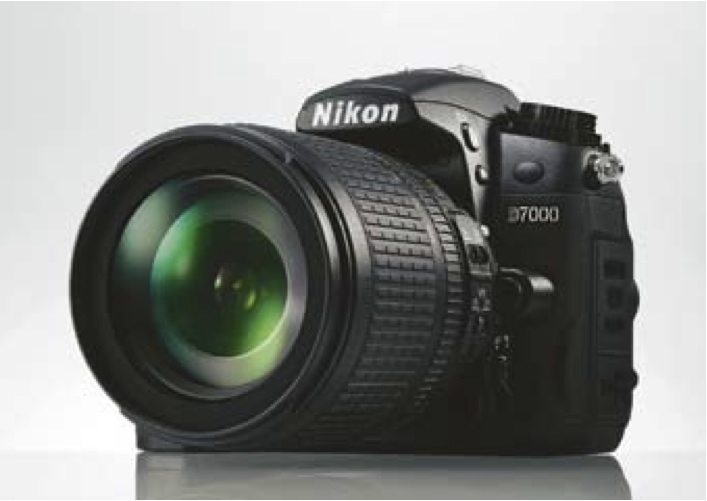 Recently Nikon released a new DSLR camera, the D7000. We were fortunate to be given a review unit shortly after its release. On paper, the specifications suggested that this will be very nice camera to use, and in person, we found that it did not disappoint.

Being a DSLR camera, it presents to its owner a reasonably advanced set of features,. For instance, you compose and focus the photo that you want to take using the same lens that the camera will be using when it makes the photo. While this is especially useful when you are shooting close-ups of things, it also makes for a more accurate method of framing the photos that you want to take. If you compose correctly, with heads correctly placed in the proposed photo, then your photos should not be printed with those heads being cut off.

The optical viewfinder is big and bright, and important point to note if your eyesight is no longer that of somebody who’s 22 years old. It’s also a very lightweight and compact camera. Not as light as some of the compact cameras that we see day to day, but this is truly a serious camera, and one that’s targeted at you if you’re a person who cares about the end quality of the photos that you take, but don’t really want to shoot at a professional level.

Its light weight, even with a kit lens, is a very nice feature, as that means that there’s not a lot of heft to carry around with you. And if you have the camera with you, then you’ll most likely be taking some photos. That’s not something you can do if you choose to leave the camera at home because it’s too heavy to lug around all day.

In use, we found it a very easy camera to learn and enjoy. The placement of the controls is typical Nikon, well placed, easy to find, and in consistent and logical locations. With 16.2 megapixels, 39 focus points, and 6 frames per second shooting speed, this camera comes close to approaching those needs that a serious amateur would be expecting to see. And full 1080P video lets you get the movies of the grandchildren getting up to what they shouldn’t be doing.

And the camera is not just feature rich, it’s also quite versatile; you can choose to let the camera do most of the work through the use of automatic settings, or you can choose to set all of the variables yourself. Or, if you’re just starting out, you can progress from one extreme to the other, using the camera’s learning mode as you go.

One real surprise was the quality of the kit lens. Often, kit lenses are just a starter lens, good enough to make the purchaser happy (they have a lens and can start shooting straight away) but not really all that sharp. And while the kit lens is certainly quite inexpensive, the sharpness of the images that we took with this camera were surprisingly crisp, and with good contrast as well.

With its sharp lens and fully developed design, the Nikon D7000 is  an easy to use and fun small DSLR that should meet the needs of anyone wishing to go beyond the quality we normally see in the lower end of the market.