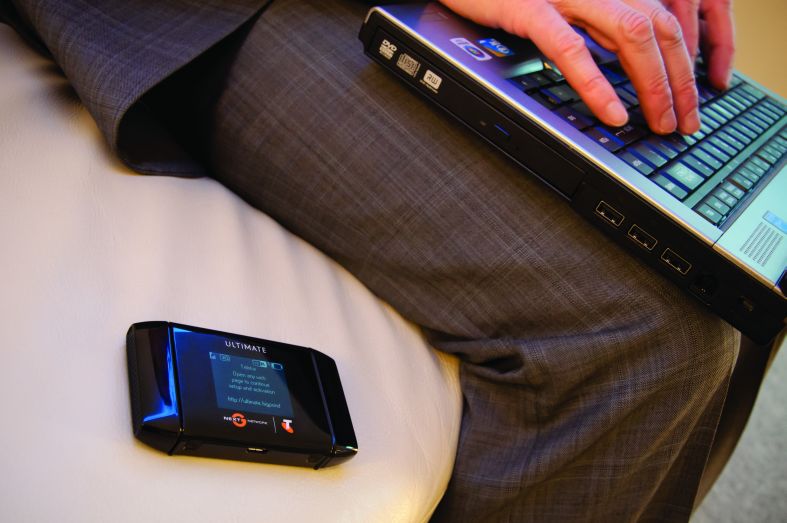 Tuesday 21 June 2011: Australians now have access to the world’s fastest 3G hotspot with the launch today of the Telstra Ultimate® Mobile Wi-Fi – a battery-powered device that shares Next G® mobile broadband connectivity with up to five devices simultaneously.

The Telstra Ultimate® Mobile Wi-Fi provides blistering download speeds ranging from 1.1Mbps to 20Mbps in Ultimate coverage areas which include Australia’s capital city CBDs and associated airports, selected metropolitan hubs and more than 100 regional centres*. Business customers will be able to purchase the super-fast device from today while a BigPond version will go on sale for consumers on 19 July.

Warwick Bray, Executive Director, Telstra Mobile Products said a surge in laptop, tablet and smartphone ownership meant Australians were increasingly turning to fast mobile broadband connectivity to get the most out of their devices on the go.

“Australians are now taking a growing range of Wi-Fi enabled devices with them when they’re outside the home and office. However managing separate mobile broadband accounts for each gadget can be a hassle. The Ultimate® Mobile Wi-Fi device makes it easy for customers to connect up to five Wi-Fi-enabled devices simultaneously at speeds up to four times faster than currently achievable using similar competitor 3G Wi-Fi hotspot products in capital CBDs and selected regional areas.

“Equipped with an Ultimate Mobile Wi-Fi device, businesses can connect teams or multiple Wi-Fi enabled devices wherever there is Next G network coverage. This means businesses can now take their own fast network with them on customer visits, to trade and community events, or to temporary work locations. It gives businesses the flexibility to keep people productive when they’re out on the road by connecting to email and work files.

“Consumer customers will be able to use the BigPond Ultimate® Mobile Wi-Fi device in Ultimate coverage areas to serve up high bandwidth content such as video and music to multiple devices simultaneously. For instance, on family holidays, parents can keep kids entertained on their games consoles and tablets by setting up a fast mobile hotspot in the car or holiday home. With a BigPond Ultimate® Mobile Wi-Fi students can stream lectures and get online via their laptop at uni, while parents will be able to access the mobile web on their tablet and smartphone during their commute to work,” Mr Bray said.

The Ultimate® Mobile Wi-Fi device sports a sleek black design and a large LED display which provides information such as signal strength, number of devices connected and battery level at a glance.  It is the first 3G hotspot in Australia to support Wi-Fi standard N connectivity for fast Wi-Fi throughput. It includes a handy audio alert that lets owners know when devices connect and disconnect from the Wi-Fi network, while a web-based control portal allows for the adjustment of network security and Wi-Fi range settings from an internet browser.

Pricing and availability
The Telstra Ultimate® Mobile Wi-Fi is available from 21 June and business customers can purchase the device on a range of Telstra Mobile Broadband plans including for $0 upfront on $49 plan that includes 7GB of data each month over 24 months (minimum total cost $1,176), For more information visit: www.telstra.com/business/mobilebroadband

The BigPond Ultimate® Mobile Wi-Fi is available from 19 July for $49 (after device rebate) on a range of 24 month BigPond Mobile Broadband plans – including on a $39.95 per month plan with 1GB of data each month over 24 months (min cost $1,007.80). For more information visit: http://go.bigpond.com/wireless/

* Capital CBDs means within 5km from the GPO in each capital city. Actual speeds vary due to factors such as distance from the base station, local conditions, user numbers, hardware and software configuration. If multiple users access the device, typical speed range per user may be lower. Visit www.telstra.com.au/mobile/networks/coverage/broadband.html  for details of coverage areas.