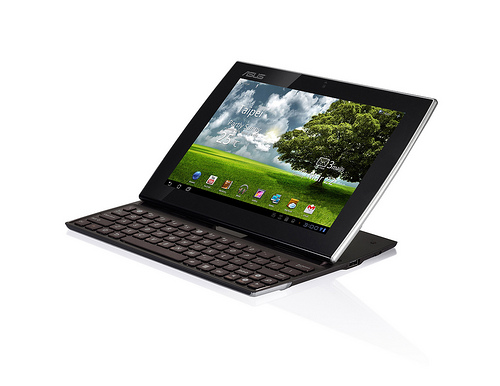 Sydney, Australia (10 October, 2011) — ASUS today announced the Australian launch of the ASUS Eee Pad Slider, a tablet that builds on the great success of the Eee Pad Transformer. It is priced at RRP$649 for 16GB and RRP$749 for 32GB and is now available from JB Hi-Fi, Harvey Norman and Bing Lee.

The Eee Pad Slider delivers a unique tablet form factor for mobile productivity with a slide-out QWERTY keyboard. That’s right! It’s a tablet with a slide-out keyboard. Beryl Lee, Australian Product Manager, stated, “We are excited to release this innovative tablet particularly following the success of the Eee Pad Transformer. The Eee Pad Slider has already made its mark with its sleek design at the International Design Excellence Awards 2011 and we are confident that its leading functionality will also be celebrated.”

The tablet is powered by Android 3.1 Honeycomb (upgradeable to 3.2) and is preinstalled with Polaris Office 3.0 suite which allows users to edit Microsoft Word, Excel and PowerPoint presentations. It equally provides access to ASUS WebStorage where customers gain access to one year of unlimited cloud storage.