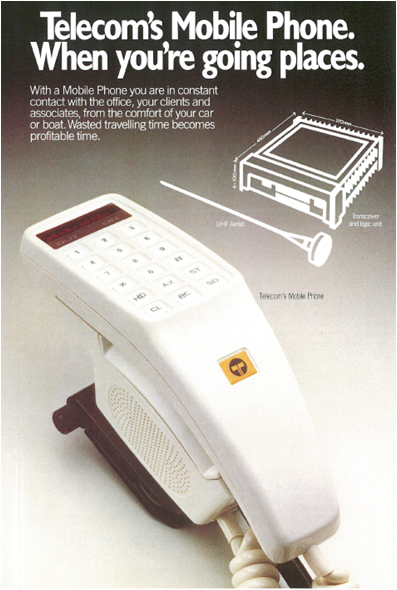 This call was made on a car phone system weighing 14 kilograms with a 45cm handset and costing nearly $5000 (or $17,000 in today’s terms). Phone coverage was limited to the greater Melbourne area – a far cry from today’s Next G® network which covers more than 2.1 million square kilometres. Today’s mobile phones are more intelligent than the largest, most expensive computer made a generation ago, and weigh an average of 200 grams. This 1981 phone could store just 16 numbers, was installed in the car and alerted owners of an incoming call with a honking horn or flashing headlights.

Telstra’s Executive Director of Networks and Access Technologies, Mike Wright, was a graduate engineer in 1981 and oversaw installation of the first mobile network exchange in Brisbane.

“Back in 1981 I never imagined there would be more mobile devices in Australia than people, and that they could be used to watch live TV, someday feature 3D content and become a critical way to how we connect,” Mr Wright said.

“We called the first Telstra network the 007 Network because that was the number range it used and while in today’s terms it was more like a ’Zero-G‘ network, it was the foundation of Australia’s modern mobile phone industry. In just 30 years we’re now building a 4G network, that’s five generations of mobile evolution so far in my career.”

In 30 years, the mobile phone has become ubiquitous:

·         Coverage – in August 1981 the mobile network was limited to greater Melbourne (the service launched in Sydney in December 1981, Brisbane in 1983 and reached all Australian capital cities by 1985) – and today the Telstra mobile network covers 2.1 million square kilometers and reaches more than 99 per cent of the population.

·         Customers – approximately 1300 customers in Sydney and Melbourne used the mobile network in its first year, compared to today where there are an estimated 22 million mobile phone services in Australia[1]. In 2010/11 Telstra connected more than one million mobile services in just nine months[2].

Commemorating this anniversary, Telstra today revealed consumer survey findings showing how Australians use their mobiles to connect. It found:

·         50 per cent of Australians feel panic stricken within five minutes when they think they lost their mobile phone; 25 per cent panic after less than a minute.

·         Nearly one third of Gen Y checks their mobile phones in the mornings before they use the bathroom, have breakfast, or go online.

·         Nearly half of Australians rank mobile phones as the innovation they value the most, more than the desktop computer to laptop and the oven to microwave.

About the Research: This research was conducted online by Pure Profile on behalf of Telstra in July 2011, on a representative sample of 1250 working Australians, aged over 18, from across Australia in metropolitan and regional areas. Please see fact sheet for further statistics.