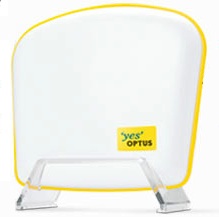 Last week I wrote about the trials and tribulations I was experiencing in trying to get my Optus femtocell – commercially known as HomeZone – into an active, operational state.

Following publication of that story, I received a phone call from Optus, apologising for all of the hassles I was seeing, and offering to come onto site (into my home) in order to try to understand exactly what the issues were that I was seeing.

My expectation was that they would have a senior engineer come in and discuss and observe what was (not) happening at my end, with a similarly experienced senior engineer available to observe, from their end, what communications were occurring over the network from my IP address and location.

My expectations were, in fact, exceeded: their (very generous) offer was to bring a couple of senior engineers into my home, while also having other engineers standing by within the Optus network centre, and also having Alcatel staff available in order to assist from their end. With these staff suitably deployed, we should be able to do some setups, and see, in real time, what was (or was not) happening.

Of course, and as I’ve already stated, this was technology which I believed I actually had a need for, and with this offer on the table from Optus, I decided to help them (and myself) try to understand what was happening here. There would hopefully be benefits for all parties involved, and this could only be a good thing.

I don’t know that there’s anything to be gained by digging too deeply into the details of all of what we tried. Suffice to say that, at the end of the day, we spent in excess of six hours, used three different modems of two different models, as well as two different femtocell devices, in order to achieve the desired outcome: a live femtocell on the Optus network.

What we do seem to have identified is that there is still a lot of learning to be done here: there is no way possible that Optus can be expected to have tested this technology with every modem on the market, and there does seem to be some incompatibility between some modems – some of which are fairly new entries into the market place – and as as a result, some compatibility issues may arise.

This is an important aspect of this technology – if your ADSL 2 modem is not compatible with the HomeZone device, whose problem is that? In my case, we tried three different modems, ranging in model age (as distinct from physical age) from about four years to very new.

One fact that we observed – but I will stress that we do not know if this is an issue – was that the two modems which turned out to be incompatible each had a built in SIP (VOIP) client and adapter.

By way of background, my network setup is that I have an ADSL2 connection and a VOIP connection that uses that ADSL2 connection. It’s been that way for a number of years, and my modem had a built in ATA which permitted me to use my existing phone handsets on the VOIP connection. The original modem in use by me though was approaching four years of age, and there’s a train of logic that suggests that you should replace your modem and router every eighteen to twenty four months. That will be the subject of a different discussion.

As a part of their preparation for this effort, Optus took a LinkSys WAG160N and tested it within their labs to ensure that it was compatible with their systems. The reason for this is that they knew that I have one of these available, but that it was not yet working within my environment. With their modem working, we had a known quantity with which to compare.

We reached a significant point in getting my site operational when this modem, known to be fully functional, failed to work within my environment, with the femtocell that I’d been supplied. When we replaced that femtocell with a different one, we were then able to observe network activity from my site. By putting my LinkSys back into the equation, we were still able to observe correct network activity, suggesting perhaps that the femtocell that I had might have been faulty. With some network connectivity established, we then tried connecting one of the other (VOIP) modems that I had on hand, but with no luck. Going back to the LinkSys restored activity, and at this stage, we allowed the femtocell to fully activate itself.

Optus will be conducting further testing and discussions with the modems’ manufacturers in order to try to understand why the particular units that I had on hand would not let the femtocell talk with the network, but in my case, we’ve moved from my initial modem to a different one, plus an installation of an ATA, in order to get the femtocell to operate, as well as leave my home phone’s configuration in the same state as it previously was.

For many typical users, this could result in some considerable extra expense, and this may be a factor to be considered: might you need to acquire a different modem? If you use VOIP, and your modem has a built in VOIP adapter, will this be an issue? Will you also need to purchase a separate ATA to keep your VOIP working?

Provided Optus retain a positive attitude to this, and can ensure that their frontline support staff get the training that they need, so that they can more readily take a pro-active attitude in helping users identify the potential for hardware compatibility issues, then I think that all will be good.

Thank you to Optus for their continued commitment to helping me to get to this point – they have truly excelled in helping me to get this working – and also to Cisco, who provided me with a LinkSys WAG160N modem to use in place of the ones I had on hand in order that we could progress this to the point were we now have a viable review environment.

And in the meantime, I now have an operational HomeZone service, and can now return to the task of reviewing exactly how well this technology actually works.